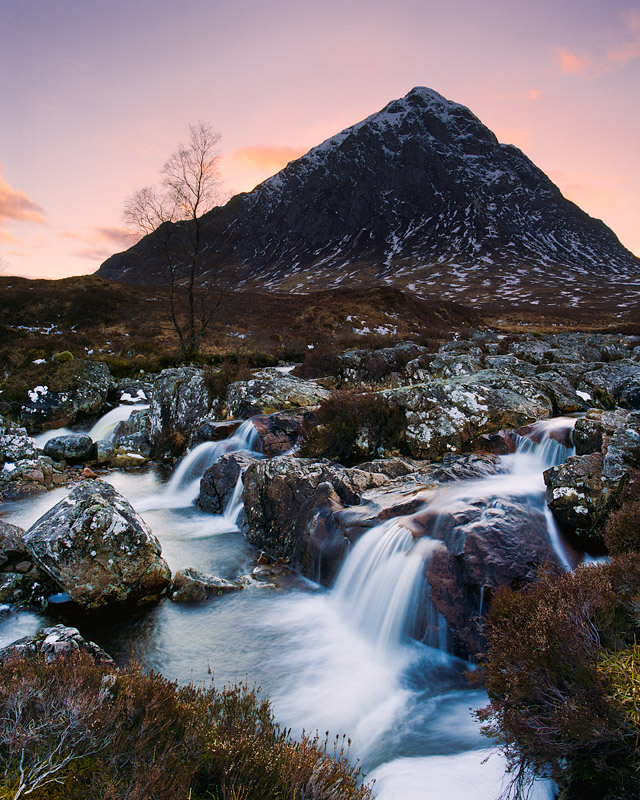 Some of you have probably stood at the same place, taking a very similar picture; for those who don’t know the area, this is Buachaille Etive Mor, possibly the most known mountain in Scotland.

I had been there many times before with my workshop participants but, as you might know, this place is ideal for a sunrise shoot, as the sun hits the mountain face on when it gets above the horizon. This time I wanted to do something a bit different with the light. I had seen similar light to this, as the low sunset sun gives this amazing glow behind the mountain, but any attempts on digital or Velvia 50 had failing results. The dynamic range was so vast for Velvia 50 or digital that, if I tried to expose for the water (critical part in the scene), I always had a lot of very dark areas that really spoilt the image, as the whole scene was back lit.

The only thing that remained was to try negative film, as it has a much larger dynamic range. The film I went for was the Fuji Reala; the results were very impressive indeed. A lot more detail than expected was captured on the film and, even though I bracketed various frames, the normal exposure was fine, with no need of the bracketed ones at all. Actually, I did the old Velvia 50 trick of metering from the whites of the water and add +1.7 exposure compensation. I must also add that I used a 3 stop Lee ND graduated soft filter to help the sky a touch.

Now, I know that negative film is nowhere near Velvia 50 for landscapes and the colours don’t look as good and vivid  but, the colours are there and can be brought out nicely in Lightroom, without any exaggerations. The only place that didn’t have a lot of detail was that part under the big rock.

Of course, all those who have been using negative film for years will say “we knew that”; however, I thought that a lot of people who are new to photography, would benefit from such article and it would give them some food for thought.

Error, group does not exist! Check your syntax! (ID: 1)