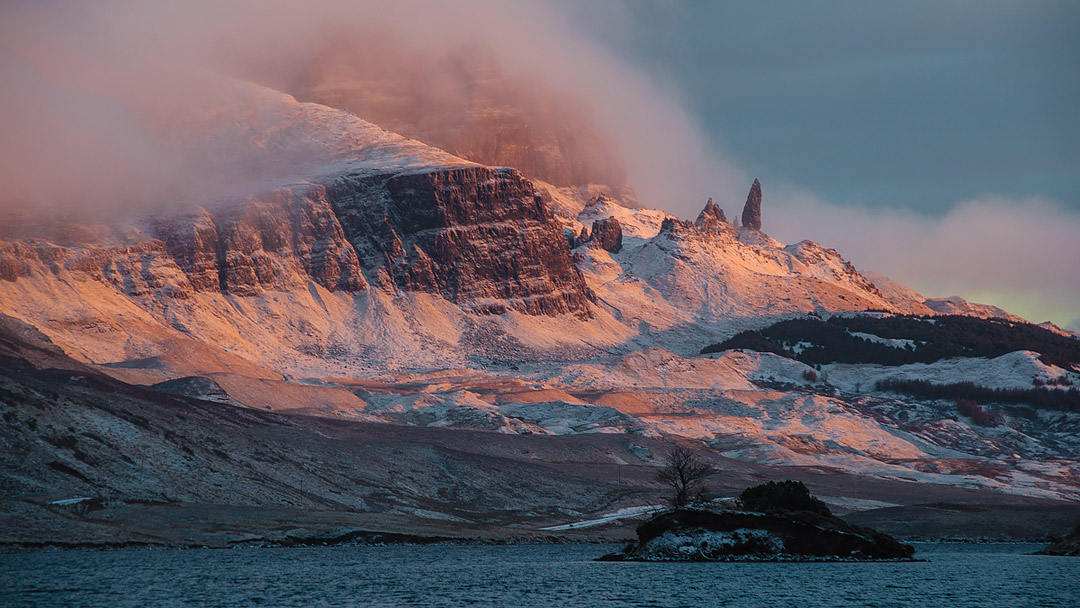 Amazing events and colour displays can happen just after a heavy storm, and such displays enable the creation of inspiring and unique landscape images
DIMITRI VASILEIOU

It was the middle of March, 2013 and, as in the previous five years, I was on the Isle of Skye in Scotland running a photographic workshop.

If I said that the weather was very unpredictable at this time of year, it would be an understatement certainly; beautiful sunny days, glorious light sometimes and, even, sudden snow storms. Not that we should complain about the snow storms; after all, they cover the mountain tops with that lovely white velvet blanket which looks so lovely when caught by the first or last rays of the sun.

It is a fact that a landscape photographer’s schedule can be harsh, especially outside the winter months, when sunrises are very early in the morning. However, it is something we have to do, as the best light is found during the early hours and, as it is said famously, at the crack of dawn.

This time it was no different either, as the alarm went off at 05:00. I met the rest of the group outside the hotel and we set off for our 20 minutes’ drive. Our destination was Loch Fada, on the north-east part of the island, and it was still dark when we arrived. I prefer to arrive on location with plenty of time to spare and to prepare, rather than rushing around trying to catch an event that is taking place already. Usually, the best colour displays can be found around 30-40 minutes before sunrise. You have to be there and ready if you want to capture the display and, most of all, enjoy it at the same time.

I explained to the group that, if we were lucky, we could catch some amazing reflections of the Old Man of Storr on the still waters of Loch Fada. The Storr is a prime example of the Trotternish peninsula landslip, the longest such feature in Great Britain. The area in front of the cliffs of the Storr is known as the Sanctuary. This has a number of weirdly shaped rock pinnacles, the remnants of ancient landslides. The most famous of these, and by far the largest and most apparent when approaching from the south, is known as the Old Man of Storr. We discussed a few options on composition and then, all we had to do was to wait for an interesting display of light.

As it was getting brighter, we could see storm clouds approaching from the distant horizon behind the Storr. My initial thought was that it was time to pack our gear and go away. In a matter of minutes, a snow storm had started and we had to run for shelter under the nearby trees, as much shelter as trees can provide anyway. It was time for decisions; do we stay, wait and ride out the storm (the day had turned to night at this point) or do we walk back to the minibus and call it a day, or at least a morning. Hot breakfast and a cup of coffee seemed to be a superb idea. I explained that, sometimes, amazing displays happen just after storms such as these and it would be wise to persist, but at first this storm did not seem to be going anywhere.

The snow storm had arrived fast, lasted for a little while, and then left as fast as it had come. We could see the sky clearing in the distance and, within a few minutes, the storm had passed but left some clouds hovering around Storr, by which time the sun was above the horizon. A splash of early morning light turned the hill to a bright pink and then to an orange glow. It was time to reach for our cameras and start taking pictures of the distant hill; the entire display lasted less than a couple of minutes. I was lucky to catch the second part of that glow with the orange hues, and this month’s picture is the result.

Within minutes, the morning had turned into a gorgeous new day, and it was time to capture the second picture of the morning. Persistence pays off; yes, sometimes.