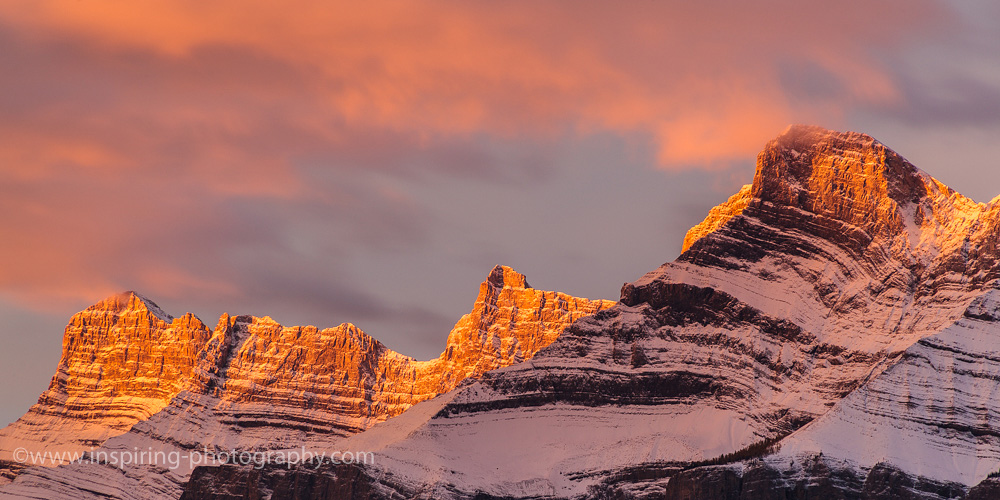 I was running a photo workshop in the Canadian Rockies on September 2013. All my participants had already captured the beautiful pre-sunrise colour (picture coming soon) and they were on seventh heaven, just like I was. It was just a few minutes later that the sun exposed itself just above the horizon; its first warm rays touched the mountain tops just above two Jack Lake and created an extraordinary display, the snow turned to liquid gold and the clouds were filled with warm sunrise light.

I had the Canon 5D Mk II on the tripod. The Canon 28-200mm f/3.5-5.6 was mounted on the camera. A very old lens by today's standards and yet, a lens that allows the freedom to extend the focal length from 28mm all the way to 200mm in a second. I had read some really bad reviews about this lens but the vast majority of people had tested it wide open. Knowing that I had no interest in using it with a wide open aperture, I went ahead and purchased it. Apart from a little vignetting flaw, the lens has been great as a walkabout one. I am now using it on the Canon 70D and, due to the smaller sensor, the lens is performing even better.